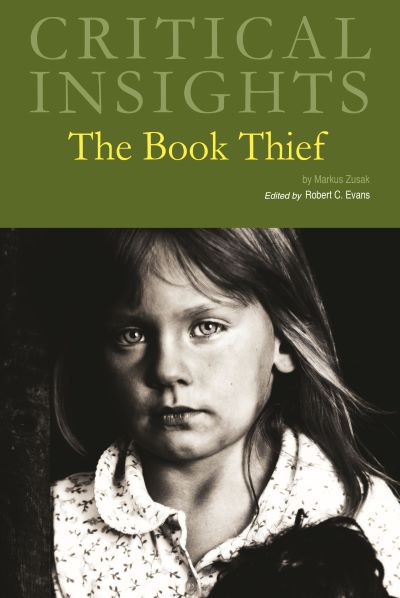 Markus Zusak’s 2005 novel The Book Thief became an instant international best-seller, was translated into over 60 languages and was made into a major motion picture. Set during one of the most important places (Nazi Third Reich) and periods (WW II) in twentieth-century history, the novel emphasizes the value of family, love, literature, and friendship and the ways these influences help people cope during the darkest times. This volume explores Zusak’s work from diverse perspectives, setting it in various contexts and examining the traits that make it a significant work of literature.

This volume, like all others in the Critical Insights series, is divided into several sections. It begins with an introductory piece—“The Book Thief, Death, and Me,” by Michelle Ann Abate—designed as an interview to introduce readers to some of the major issues treated in the volume as a whole. This is followed by a Biography of Markus Zusak, written by volume editor Robert C. Evans.

A collection of four critical contexts essays are intended to treat the novel (1) from a historical vantage point, (2) in terms of its critical reception, (3) using a specific critical lens, and (4) by comparing and contrasting it with another important work. This section opens with an article by Lindsay Huysentruyt titled, “Hitler, Hope, and the Autobahn: ‘But the Lord sent us our Führer and he fed us,’” which draws on interviews with Germans who lived under Hitler. This is followed by a piece written by Joyce Ahn, “Markus Zusak’s The Book Thief: A Survey of Academic Criticism.” The following two articles are written by Robert C. Evans and Caitlin Mattera respectively. The first, “Teaching Literary Criticism Using Reviews of Markus Zusak’s The Book Thief: An Experiment in Critical Pluralism,” offers a particular critical lens by examining numerous newspaper and magazine reviews of The Book Thief. The final essay, “Language and Morality in Novels by Twain, Salinger, and Zusak,” compares and contrasts the work of Zusak, Mark Twain, and J.D. Salinger.

In the final section, Resources, easy-to-follow lists are provided to help guide the reader through important dates and moments in the author’s life. A selection of further reading is then provided. Each essay in Critical Insights: The Book Thief includes a list of Works Cited and detailed endnotes. Also included in this volume is a Chronology of Markus Zusak’s Life, a list of Additional Works by Zusak, a Bibliography, biographies of the Editor and Contributors, and an alphabetical Index.

The Critical Insights Series distills the best of both classic and current literary criticism of the world’s most studies literature. Edited and written by some of academia’s most distinguished literary scholars, Critical Insights: The Book Thief provides authoritative, in-depth scholarship that students and researchers will rely on for years. This volume is destined to become a valuable purchase for all.

Libraries and schools purchasing the printed version of any Salem Press title get complimentary online access to that title on our new online database, http://online.salempress.com. Combining Salem's Literature, History, Health, Science and Careers titles, students and researchers can now access all of their Salem content in one comprehensive site. Any school or library with print reference content in Salem Press' database is entitled to online access to that content. This access is an inherent part of our product.